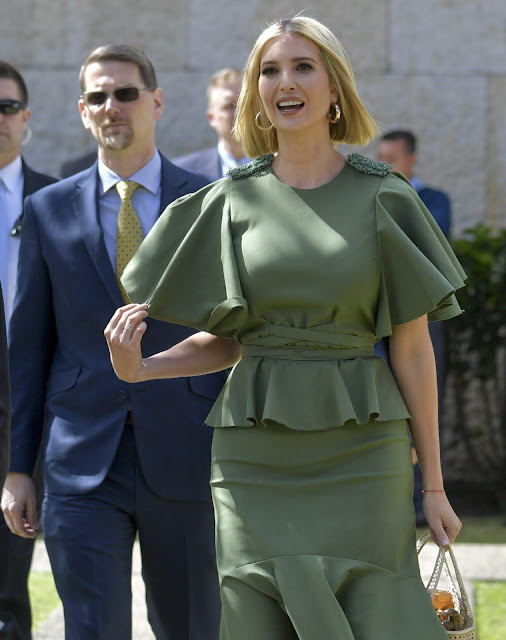 On Monday, Ivanka Trump touched down in Bogotá, Colombia—as did her new lob, which, as Elle quickly pointed out, sure ups her resemblance to another privileged, dynastic daughter: Succession's Shiv Roy.
Naturally, Trump also pulled the back-to-school style move of carrying her new look over to her wardrobe, too. While the white dress she wore upon her arrival was ordinary enough, when it came time for Trump to head to the General Santander Police Academy the next morning, the first daughter stepped things up a notch by stepping into an army green statement dress designed by Johanna Ortiz.
Ortiz herself is from Colombia. (She was born and is still based in what's informally known as the world's salsa-dancing capital, Cali.) But much more relevant is the fact that Ortiz is also known for gravity-defying designs like her mega-popular Tulum top, which rely heavily on ruffles, balloon sleeves, and off-the-shoulder shapes. Even with beaded epaulettes, a wrap-around tie, and peplum waist, then, Trump's choice of design kept the focus on her biceps and shoulders—especially when the wind got its hands on them, disrupting its intended, relatively flat silhouette.