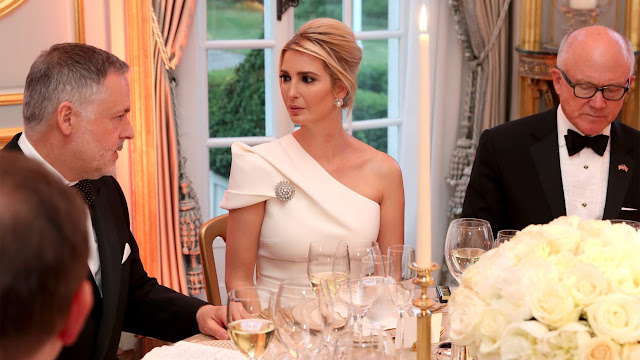 On her second day in London, Ivanka Trump treated the UK's government headquarters as if it were an Infinity Room, taking time to meticulously document her entire visit on Instagram.
Ivanka has emerged the most egregious clout chaser in a family that seemingly feeds off attention. On Tuesday, she posted ten pictures taken inside 10 Downing Street, in what is becoming the worst “What I Did This Summer” photo essay ever written.
While ignoring boos from protesters this afternoon, Ivanka entered “a business roundtable for industry leaders” in a $3098 Dalmatian-print ensemble by Burberry.
No matter than comparisons to Cruella de Vil were inevitable. Nothing says rock solid diplomacy quite like dressing as a (fictional) puppy killer.
Much like her father, who has done many unforgivable things as president—including making us watch him in a very tiny dinner coat on Monday —the former model has proved pretty inept when it comes to picture time.
As a “Woman Who Works” (doing what is anyone’s guess), Ivanka clearly fancies herself an influencer. But shots of the first daughter cheesing in St. James Palace or standing next to the female “industry leaders” she has chosen as set decoration for the ‘gram betray ghoulish posturing and a fake smile. It all seems so forced. Why even bother?