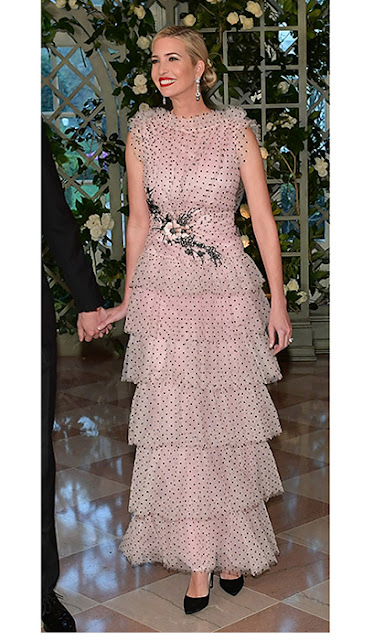 Ivanka Trump style: All of the first daughter's latest looks

Ivanka Trump has been in the public eye nearly her entire life, first as the only daughter of real estate mogul Donald Trump and his first wife Ivana, but of course most recently as following in the footsteps of much-watched first daughters Chelsea Clinton and Malia and Sasha Obama, as the offspring of the US President. The onetime model, who has her own fashion label and is a mother of three, has become known for her ladylike and polished New York City style, even as she has moved to Washington DC. Here's a photo gallery of Ivanka's latest fashion looks. Ivanka Trump was spotted – literally! – in a pink polka dot dress by Rodarte as she arrived in the Booksellers Area of the White House to attend a state dinner honoring French President Emmanuel Macron on April 24.