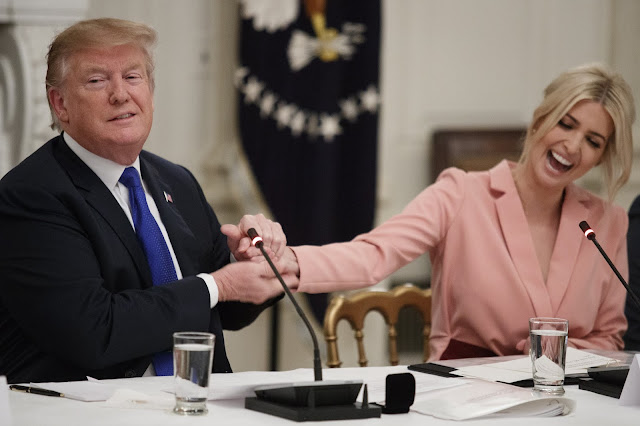 Rumors have been swirling since President Trump’s recent rally in Florida where supporters behind him were seen with signs that read “Trump 2020”. While it’s not exactly abnormal to adorn your signs without your current Vice President, especially someone who values his own name over others so much, it has fueled the idea that maybe President Trump will seek re-election with a new running mate in 2020.
This isn’t a new idea either. It’s been over 40 years since a president ran for re-election with a new running mate — it’s been over 70 years since it was successful. As rare as it happens, it is still a subject of speculation amongst every leader running for re-election. But as with everything surrounding the Trump Administration, this one is different.
There are two things that Donald Trump loves in this world unequivocally. The first is obviously himself. The second is his daughter, Ivanka.
Ivanka has taken on a very large role since her father won the presidency. She is his special advisor and has traveled the world meeting with world leaders in various forums. This is usually something handled by the president himself or the vice president, but President Trump has often delegated this position to Ivanka, who came in with zero experience in this arena.
Writers and journalists like Sarah Kendzior have been observing this and writing about it since it started. It appears that Donald Trump has been preparing his daughter for some form of elected office in the future. And the future could be now. Here’s why it would work for him.
Donald Trump trusts Ivanka. Ivanka might as well be the vice president right now. There is nobody that Donald trusts more than his daughter. She is a part of him and has faithfully been by his side and never dares to say a negative thing about him. She lives by and understands what he means when he says that loyalty is everything to him.
Donald Trump does not need Mike Pence. Mike Pence was chosen for one reason and one reason only — he’s as close to a fundamental evangelical as you can get in politics. Donald Trump had a religious problem going into the election and he used Mike Pence (and Jerry Falwell Jr.) to give him that official evangelical checkmark of approval to get the evangelical vote. At this time, enough propaganda has been out there that he no longer needs Mike Pence. As long as Jerry Falwell Jr. is there to promote him as a man of God, that’s all he needs for that evangelical approval.
Donald Trump needs the women’s vote. Women are the largest group of people outside of the non-Christian population and non-caucasian population that do not approve of Donald Trump. Would a female vice president help soften that image and tip the scales? It may just enough. It’s a better option than Mike Pence that’s for sure.
Donald Trump likes making history. A Trump as the first female vice president? History. Then when Donald steps down in 2023 (or impeached before then) to let his daughter take over, it makes a Trump the first female president of the United States. Again, records are broken people. In addition to that, she would not hesitate one bit to pardon him for any potential crimes he may have committed. It’s as easy of a “Get Out of Jail Free” card as you’re gonna find.
This is as close to an autocratic, kleptocratic, monarchy-dynasty as we can get. And without any accountability for President Trump, the next President Trump will continue to do the same thing — tear apart the fabric of America for their own personal wealth and power.
This is why the Democrats need to get someone who can win on the ballot in 2020. Right now, it doesn’t matter “how far left” they are as long as they can get the votes needed to win in a national election. Losing in 2020 will be much worse than any left-center Democrat could ever be.
Donald/Ivanka 2020, ladies and gentlemen. Prepare for the ride.