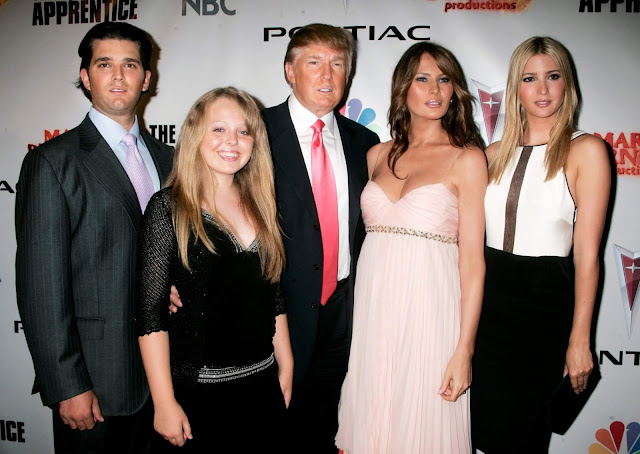 When Trump Found Out Marla Was Pregnant With Tiffany, He Said, 'Oh, Great'

Donald Trump (center), then host of the reality-television series “The Apprentice,” poses with his family (from left): son Donald Trump Jr., daughter Tiffany Trump, wife Melania, and daughter Ivanka at the party following the live telecast of the show’s Season 5 finale in Los Angeles, on June 5, 2006.

Ah, Tiffany Trump. Law student. Heiress. Short-lived musician. Butt of jokes galore about her dad's overt preference for Ivanka and the others.
Yeah, it's worse than that.
When Donald Trump learned that then-girlfriend Marla Maples was pregnant with Tiffany, Trump said, "Excuse me, what happened?" and "Oh, great"—the latest bombshell revelation contained in 15 hours of tapes from The Howard Stern Show released this week to Newsweek and Factba.se.
"I'm glad it happened. I have a great little daughter, Tiffany," Trump told his pal Stern in the 2004 interview. "But, you know, at the time it was like, 'Excuse me, what happened?' And then I said, 'Well, what are we going to do about this?' [Marla] said, 'Are you serious? It's the most beautiful day of our lives.' I said, 'Oh, great.'"
It's hard to ignore Ivanka Trump's place as the family favorite—the future president called her "a beautiful girl" and "a great girl" dozens of times in the new tapes, which also seem to show a particular obliviousness toward Tiffany. Newsweek reported on Monday that the tapes also revealed Ivanka and Donald Jr. tried to "bump" the younger Trump out of her inheritance, and that Trump was proud of her "to a lesser extent" than his other kids.

0 Komentar untuk "When Trump Found Out Marla Was Pregnant With Tiffany, He Said, 'Oh, Great'"