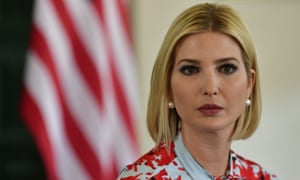 Why Ivanka Trump’s new haircut should make us very afraid

If her family cares about anything, it is image. Her political bob (pob) may be an attempt to get us to take her ambitions more seriously
It is hard to keep up with the volume of news these days. However, that is no excuse for me missing what may prove to be the biggest story of the year: Ivanka Trump getting a haircut. Yep, the first daughter chopped several inches off her locks earlier this month and is now sporting a shoulder-length bob.
I have no idea how I missed this story, because it was everywhere last week – reaching an online audience of more than 1.4 billion people, according to an analysis by Critical Mention, a software company that tracks this sort of thing. Of course, online metrics should be taken with a pinch of salt; I doubt almost one in five people in the world read about Trump’s new do. Nevertheless, an inordinate number of us appear to find the heiress’s hair bizarrely captivating. The new cut has been analysed to within an inch of its life. The Daily Beast, for example, mused that it “could be an optics ploy to communicate control in a derailed administration”. Salon asked whether the shorter cut was a “nod to her growing ambitions”, while an image consultant told Refinery29 that Trump “wants to re-establish credibility because her father’s campaign is coming up ... this hair makes her look more grounded and more mature and more professional.”
It is possible Trump just felt like cutting her hair. But if the Trumps care about anything, it is image; I wouldn’t dismiss the idea that Trump’s new cut is an attempt to get us to take her politicking more seriously. Women’s hair, after all, is tangled up in traditional ideas of femininity. There is a reason so many female politicians sport a short style known as the political bob (pob): it is less “feminine”, which makes them seem more powerful. So be afraid, be very afraid: Trump’s new do may well signify that she has ramped up her political ambitions. God help us all if she goes brunette.