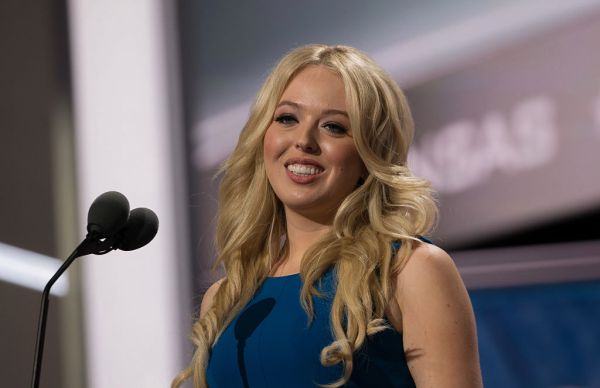 Tiffany Trump made her political debut Tuesday night at the Republican National Convention. Donald Trump’s youngest daughter emphasized in a speech what he means to her as a parent, calling him an “encourager” and said that his example motivates her to be better. “He draws out that talent and drive in people so that they can achieve their full potential,” she said in her address. “That’s a great quality to have in a father, and better yet, in the president of the United States.”
And while the American public is familiar with Donald Trump’s wife Melania and his eldest daughter Ivanka, Tiffany has kept a lower profile. In an exclusive interview with People, the younger daughter talked about her upbringing and expanded on what her business tycoon father is like at home.
“He was always just the most funniest, loving father,” she told People. She grew up in California with her mother, Marla Maples, after Maples and Trump split in 1999. And despite the distance, she said she feels close to him. She graduated from University of Pennsylvania earlier this year, and told People she plans on going to law school. “I hope I’ve made him proud,” she said.
Tiffany’s experience with her father seems to reflect that of Ivanka Trump. The older sister is a close confidant of her father’s and has played a major role shaping his campaign as well as helping run his businesses while the Republican nominee is on the campaign trail. She’s stated that her father is a “feminist” and credits him for shaping her into who she is today. “He always told me and showed me that I could do anything I set my mind to if I married vision and passion with work ethic,” she told the Sunday Times earlier in July.