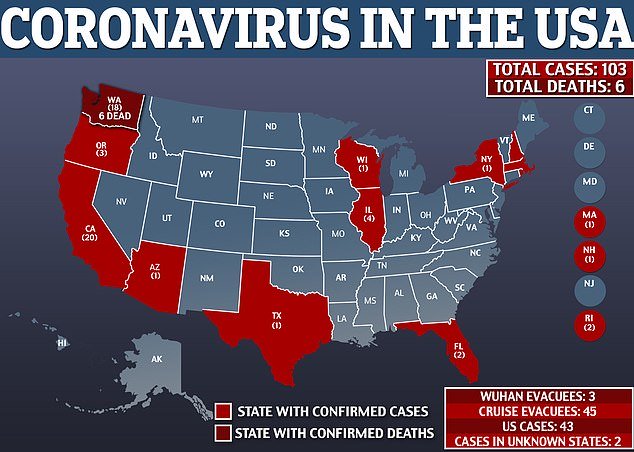 By Countercurrents Collective
The U.S. state and local public health offices are scrambling to respond to the coronavirus outbreak. They are doing so against a backdrop of years-long budget cuts, leaving them without the trained employees or updated equipment to adequately address the virus’ growing threat, former public health officials say.
A USA Today report said:
“In the last 15 years, public health, the country’s frontline defense in epidemics, lost 45% of its inflation-adjusted funding for staff, training, equipment and supplies. The Public Health Emergency Fund, created for such disease or disaster relief is long depleted. And much of the money the federal government is racing to come up with now to combat the COVID-19 outbreak will be pulled from other often-dire health needs and likely will arrive too late to hire the needed personnel.
“Florida, with two cases so far, and Washington, where six deaths have been reported, have declared states of emergency, and state and local officials there and elsewhere assure they have staff, equipment and procedures ready. But early testing glitches in California, the failure to protect federal health officials from the virus in cruise ship patients, and a climbing number of U.S. cases raise questions about that confidence.
“Health and Human Services Secretary Alex Azar told a Senate panel last week there are only about 30 million of the 300 million face masks needed for health care workers.
“‘Once again, we’re not that prepared,’ said Dr. Boris Lushniak, a former deputy and acting U.S. Surgeon General who spent 13 years at the Centers for Disease Control and Prevention and is now dean of University of Maryland’s School of Public Health. ‘When those (basic public health efforts) aren’t supported well, in the time of emergency you don’t have the infrastructure to shift gears and go into emergency mode.’”
According to the report, the prospect of contending with an epidemic hits often-ignored public health departments already taxed by at least 70 homegrown threats, including a host of sexualy transmitted diseases and tuberculosis.
The report said:
“It’s been 16 months since President Donald Trump declared opioid abuse a ‘public health emergency,’ and less than a year since Kentucky warned it might have to close 42 of its county health departments amid the country’s worst outbreak of Hepatitis A. In New York City, an explosion of measles among unvaccinated children that ended just six months ago cost the city more than $2 million to fight and involved 400 public health employees, according to the Big Cities Health Coalition.
“Such health crises come on the heels of massive cuts to state and local public health budgets that started during the recession, and saw funding steadily decrease. Public health funding fell from more than $900 million in fiscal year 2005 to $675 million in fiscal year 2020, a drop of 25% or 45% when adjusted for inflation.
“Public health represented 2.5% – or just $274 per person – of all U.S. health spending in the country in 2017, according to the nonprofit Trust for America’s Health.”
It said:
“‘The nation’s ability to be prepared has been eroded in an enormous way,’ said Dr. Rahul Gupta, West Virginia’s former health secretary and now chief medical officer at the March of Dimes. ‘It’s really unbelievable that it’s happening when we have a higher frequency of these risks’ of global novel virus transmission.’”
The report added:
“The U.S. President Trump last week asked Congress to approve $2.5 billion for coronavirus response efforts that includes $1 billion for vaccine research. Democratic Senate Minority Leader Charles Schumer proposed $8.5 billion, including $2 billion that would repay state and local governments. No matter what amount is ultimately approved by Congress, the money will come from other health areas and much of it likely will take months wend its way through the federal Department of Health and Human Services to states and then local health departments.
“Another $136 million in funding cuts from other HHS agencies, including $37 million from heating assistance for low income families and $4.9 million from the Substance Abuse and Mental Health Administration, is now being transferred to states, HHS spokeswoman Caitlin Oakley said Friday.”
The report cited Brian Castrucci, an epidemiologist who spent a decade in the health departments for Texas, Georgia and Philadelphia: As a pandemic looms “is not the time to have the conversation” about funding health departments.
According to the report, Brian Castrucci has little faith Congress and White House officials will learn from their funding mistakes and make changes after the coronavirus outbreak ends. “While we are waiting, people are getting sick and the response doesn’t wait,” said Castrucci, now CEO of the deBeaumont Foundation. “We don’t have the luxury, working in public health, to wait for money to come.”
The report said:

“Trust for America’s Health, an illness and injury-focused nonprofit with funders including the Robert Wood Johnson Foundation and W.K. Kellogg Foundation, found it took six weeks for funding to get approved by Congress for the Ebola outbreak, seven weeks for H1N1 in 2009-2010 and seven months for Zika, which struck the U.S. in early 2016.
“Counties wracked by opioids in states including West Virginia, Indiana and Ohio – all ranked by Trust for America’s Health among the 13 least prepared states for a public health emergency – now have to prepare for the possibility of airline passengers needing immediate isolation in hotels and relying on state and federal money redirected from other pressing needs.
“Still, in Indiana, which also ranks 49th on one list of public health funding, Health Secretary Kristina Box said the state is ‘very supported in this and not feeling that we are lacking any funds to address this issue.’
“In the state’s Marion County, however, health department director Dr. Virginia Caine warned ‘a major crisis or a major number of cases’ could be a different story.
“‘I might be concerned that we may not have enough protective equipment, surgical masks, things of that nature, where our stockpile we might want to have be a little bit larger,’ said Caine.
“In Ohio, Columbus’ Public Health Commissioner Dr. Mysheika Roberts said if anyone is to blame for a lack of preparedness, it’s the federal government as it determines most of the funding for local health departments. She called Washington’s decisions ‘unfortunate’ but said the state’s larger cities were well positioned for a possible outbreak.
“A day before Washington announced its first coronavirus death Saturday, Seattle and King County health department policy director Ingrid Ulrey said the cost of responding to the outbreak already was daunting. Diverting staff to coronavirus and overtime already had cost about $200,000 more a week – about 5% of the department’s budget.
“Ulrey said the office plans to hire a temporary team of workers for about eight months at an estimated cost of least $1.25 million. The additional cost could be two or three times that if there are ‘many many cases.’
“‘This is not sustainable,’ she said.
“Time is also a problem, said Oscar Alleyne, program director at the National Council of County and Local Health Officials. State and local health departments have lost about 30,000 people over the last seven years, he said, and now have to find or wait for money to hire recent public health graduates and train them for these new, often short-term jobs.
“It takes six to nine months to find and hire the people capable of doing the testing and other surveillance work needed, said Dr. Lamar Hasbrouck, a former CDC medical epidemiologist, who was Illinois’ health secretary from 2012 to 2015.”